It’s hard not to lose your foothold when someone peers inside you, sees all those things you tried the hardest to keep hidden, all those ugly shames you’ve tried to tell yourself aren’t really as bad as they seem. All those lies disintegrate in the light 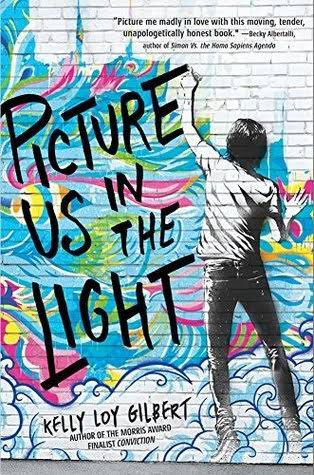 Some things are unforgivable. And messing with our emotions is one of them. I won’t forgive you, Kelly Loy Gilbert, for writing a book so beautiful, so honest, so sincere and (yes) so tear-jerking.

Picture Us In The Light by Kelly Loy Gilbert is about an Asian American teenager, Danny, who is an artist. Danny gets into RISD with a scholarship, his dream school for learning art.

Danny has always worried about how he would stay away from his best friend Harry, who he is in love with. He often questions Harry’s love for his girlfriend Regina.

Danny has hated that his parents have always kept secrets from him, but when one day he finds a mysterious, taped-up box in his parents’ closet with a file on a powerful Silicon Valley family, he realizes there’s more to his family history than he knows.

Danny has to figure it all out and face the ghosts from his past to have a future that he has always aimed for.

If you want to know my current state of mind, I’d have you listen to Zayn’s Insomnia. If you don’t know the song, let me just type out the lyrics here.

My sleep is stolen

I didn’t know this would have such a strange effect on me. I don’t understand why I’m not a sobbing mess already. I don’t know why I’m still able to function. Maybe I’m numb. Maybe that’s how you deal with heartbreaks. Or maybe that’s how you die of a broken heart syndrome. This book just makes you realize how much your loved ones sacrifice for you.

I loved all the book characters. They are so complex. They felt so real, so beautiful and so flawed. I liked Danny, his friends, and his folks. My favorite character in the book was Harry, though. I loved how Danny and Harry vibed quickly and how inseparable they were.

I related a lot to Regina, who was heartbroken throughout the book. Regina’s grief felt so real after losing her best friend, Sandra. Even though she is angry, she understands how much love matters.

This book talks about suicide and grief and if reading about this subject triggers you, you should avoid it.

However, it is a beautiful novel and will probably have a deep impact on you. I think you should totally read it.

If you’re looking for just another YA romance, I won’t recommend it to you. This book is more about friendship, family, unconditional love, losing a loved one, grief and guilt.

One thought on “Book Review: Picture Us In The Light”